Margaret Fuller was my best friend. I was eight. She was eighty-three. She lived two houses down the hill from us. It wasn’t a very big hill, but it was a magnet for kids, steep enough for winter sledding and soapbox derbies. There were plenty of kids in the neighborhood to play with: the Bradshaw girls and Tommy at the bottom of the hill, Billy and Harley across the street, Sally, the unscrupulous older girl next door who always won my best marbles, and the blond pig-tailed twins who looked like they had stepped out of an ad for Dutch Boy paints.

Not one of kids was nearly as interesting or as exotic as Mrs. Fuller.

Her house was my sanctuary. She moved like a whisper in her carpet slippers and long, soft dresses. There was no hum from the refrigerator. She didn’t have one. Nor did she have a bathtub or a television or many electric lights. Instead, there was the soft glow of a kerosene lamp in the evening, the comforting, steady tick-tock of the ancient grandfather clock, and the reassuring creak of her rocking chair. On summer days, I might be presented with a glass of her homemade tomato-vegetable juice. When her arthritis wasn’t too bad, she would walk out in the back yard with me to admire the blossoms on her rose of Sharon.

The clock was wound weekly by the Colonial Bread man when he delivered bread in our neighborhood. A tin-lined oak icebox was at home on the screened front porch. I loved hanging around when the iceman delivered his big blocks of crystal-clear ice, carrying them to the icebox with giant tongs.

Margaret Fuller was a generation older than my grandmother, who relied on her for house-keeping and child-rearing advice. When my Aunt Margaret, who was named after Mrs. Fuller, cried inconsolably from the pain of teething, Mrs. Fuller gave her a whiskey-soaked rag to chew on, as the folks in Northern Ireland had done at the time she was born there in 1866. I later wondered if the medicinal use of whiskey was the reason my friend was so calm.

Mrs. Fuller had plenty of time to teach a little girl to play checkers and dominoes, solitaire, war, and Chinese checkers. She taught me how to play Country Gardens on the old pump organ in her parlor, probably the same organ my mother had played as a child. On top of the organ, keeping company with photographs of her two sons and late husband, was a large glass jar of seashells from a long-ago trip to Florida. Because I was a respectful and careful little girl, she let me take all the shells out and play with them. Next to helping Grandma pick raspberries in our garden, it was my favorite thing to do in the whole world.

When I was eight years old, Mrs. Fuller gave me the jar of shells. I was overcome. Never in my life had I dreamed of possessing such a treasure! That same summer, the July issue of National Geographic featured an article on the wife of Admiral Nimitz and her shell collection, with pages and pages of full-color photos. The serendipitous juxtaposition of Mrs. Fuller’s gift and the article ignited an unquenchable passion for the sea and its creatures. That was how my journey began.

By the time I was eighteen, I had a collection that encompassed not only seashells, but prehistoric shark’s teeth, dried seahorses and pipefish, blowfish, octopi, and other creatures in formaldehyde. When dead birds turned up in the refrigerator for an assignment in ornithology class, my mother was ready for me to move out of the house. I did. I moved to Ann Arbor, where I graduated from the University of Michigan with a degree in plant biology and won the top honors in biology. Thank you, Margaret Fuller. 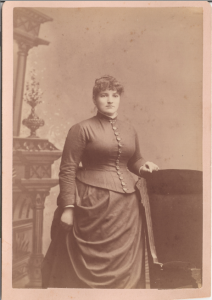 Margaret Fuller as a young woman.