Imagine that your diet was limited to the ten bestselling grocery items: soda, cereal, frozen dinners, salty snacks, milk, laundry detergent, eggs, peanut butter and jelly, packaged deli meats, and breads. What if you were limited to today’s top ten bestsellers in the grocery category on Amazon: three kinds of coffee products, three kinds of coconut oil, three kinds of energy bars, and distilled water with added electrolytes. Unless you abhor fresh meats, fish, fruits, and vegetables, you would quickly tire of your diet, and you would probably develop health problems.

Now imagine limiting your reading diet to the New York Times bestsellers. If you compare those of 1950 to the bestsellers today, you’ll notice a difference. There’s a new category: mass-market fiction. On January 16, 2016, half of the top ten fiction titles were film tie-ins. In contrast, the bestseller list of October 1, 1950 included books by Ernest Hemingway, A.J. Cronin, Robert Penn Warren, Tennessee Williams, Evelyn Waugh, and Frank Yerby, all of whom became classic authors. Why the mass market approach and movie tie-ins today? Profit.

The Rise of the Independents. Book publishing has changed dramatically with the meteoric growth of print-on-demand and self-publishing. This is good news for small independent publishers and authors. It is also good news for readers who want variety and quality in their literary diet. It is not such good news for mainstream publishers, whose profits are eroding.

The Big Five. In an effort to survive indie competition, publishing houses have consolidated. In the U.S., just the Big Five remain. Instead of dozens of traditional publishers, we have only Simon & Schuster, Hachette, HarperCollins, Holtzbrinck-MacMillan, and Penguin Random House.

It is difficult for these traditional publishers to take a chance on a new author or one with no track record. It is no surprise many Big Five titles are tie-ins to films and television series. Authors who are already well-known have a tremendous advantage over indies in gaining the attention of such publishers, as do celebrities: mega-church pastors, politicians, and news anchors. The focus is increasingly on blockbusters to maximize profits, not on variety and choice for the reader.

Simon and Schuster publishes just 2,000 titles a year under 35 imprints, including Pocket Books and Scribner, giving even the best independent author only the slimmest chance of having a manuscript reviewed.

Independents Bring Quality, Variety, and Choice to Readers. Today, expert editing, proofreading, layout, and book design services are available to authors through small independent publishers and freelance services — services that were once available only through traditional publishers.

Independents are free to write whatever they want. They are not bound by the chains of political correctness or the whims of literary fashion. They are not subject to mainstream media bias. Because mainstream publishers often acquire the rights to a book, they can influence its content if they want to. Authors can now choose an independent publisher who lets them retain the rights to their own book. With a burgeoning number of independents, every author can find a publisher who is a comfortable fit.

It is a myth that self-published work is of poor quality. Too many traditionally published books these days are not worth the paper they are printed on. The imprint of a well-known publisher is no longer a guarantee of quality.

How You Can Help Your Favorite Author. Independent authors face a few problems. It is hard to get a review in a major newspaper. Most best-seller lists are limited to books from the Big Five. That means that many exceptional works never have an opportunity to be listed. Major book festivals often limit their panelists to authors who have been published through traditional channels. Finally, many of the most prestigious awards are limited to authors published by the Big Five. These obstacles can be overcome with the your help. Here’s how: 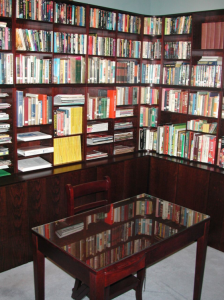 Goodreads is a site for readers to find books and rate or review those they have read.  Although recently acquired by Amazon, the site has so far retained its original values and format.  Registering is free.

Stevo’s Book Reviews  Steve Brock is the former manager of Microsoft Network’s Books and Reading Community.  He has  a large following of book lovers who read his monthly list of recommended books.  Steve’s list is a valuable resource for book lovers, as well as for online and bricks-and-mortar bookstores, and the acquisitions departments of academic and public libraries.  Pageviews are running at over 250,000/month.

Tucson.  Bookmans Entertainment Exchange  With six stores in Tucson, Phoenix, Mesa, and Flagstaff, Bookmans is a bibliophile’s heaven.  The stores are the size of a Barnes & Noble, and treasures await you in this Arizona chain for three reasons: three of the four cities are college towns; because Arizona is home to many snowbirds and transplants from other states, you never know what local history or genealogy books you might find from other states and other countries; and old books are generally in better condition because of the dry climate.  Booksmans hosts book signings by local authors and sponsors many community events.

Tucson.  Antigone Books is an eclectic and fun independent bookstore on Tucson’s 4th Avenue, where shops are one-of-a-kind except for a single Dairy Queen Franchise.

San Diego.  Mysterious Galaxy is an independent bookstore with locations in San Diego and Redondo Beach.  They specialize, but are not limited to science fiction, mystery, suspense, horror, and fantasy.  Check their website for the fun events hosted by Maryelizabeth Yturralde and her pals.

Chatham, New York.  The Chatham Bookstore  The children’s section of this charming independent bookstore has a picture window that affords a view of the passing trains.  If you’re in upstate New York, Chatham’s main street is a must.  Big things come in little packages!