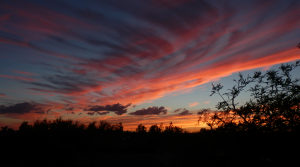 Sunset in the Sonoran Desert. The best things in life are free.

My husband wasn’t quick enough to mute the commercial that came on while he was watching the morning news last week, and I was subjected to a sales pitch from a financial planning institution. A mellifluous, reassuring male voice intoned something about “a well-planned life” over a visual of sixty-somethings — who looked like forty-somethings — cavorting barefoot in an idyllic lakeside scene of lush grass and large trees. Hypnotic romantic music played in the background.

Pick up a magazine like Worth, Forbes or Wealth, and you’ll see titles like “Life Well-Planned” or “Planning Properly for your Golden Years.” The latter is from ConsolidatedCredit.org, and the first sentence of the article is “Don’t be stuck working full time while others your age are enjoying their retirement.”

Having grown up in a farming community in a part of the country that is prone to blizzards and tornadoes, I’m astonished that people are so easily convinced that with the right planning, unpleasantness — even unhappiness — can be avoided.  Of course, to plan properly, you need to spend money on expert advice.

When you live in the country and a blizzard is coming, you fill containers with water, lay in extra supplies, including candles, and make sure you have a means of getting to the barn to milk the cows. You don’t assume that you can control the weather or that the government can control the weather. On one occasion, my parents drove to work, and a blizzard struck so suddenly that they couldn’t get home for three days, even though they were only three or four miles from home.  This wasn’t planned.

My favorite birding buddy, John, collapsed in the doorway of his apartment at the age of thirty-four, still in his martial arts clothes. He was one of the fittest people I’ve ever known, even considering doing the next Christmas Bird Count on his bicycle. His territory would have been Navajo County and he would have covered 150 miles. He died of an aneurysm in his brain. Not planned. My high school classmate, Mary, became suddenly very sick at the local hamburger joint and was rushed to the hospital. She had a brain tumor. Not planned.

The bottom line is that life can’t be planned. And that’s okay. The implication that a well-planned life will make you affluent and that guaranteed affluence will make you happy is simply wrong.

A Fox13now.com headline of November 21 says, “Money really can buy happiness, new Harvard study shows.” Michael Norton, a Harvard Business School Professor, has researched the “science of spending,” and he has the answer. Spending money on experiences like vacations, rather than electronics and such will make you happy.  (Too bad for you suckers who don’t have enough money to travel.  You obviously didn’t plan well.)

Norton contrasts buying big-ticket items, which he says can be stressful, to buying a vacation, which won’t be. For a lot of people in this country, a plane ticket from Phoenix to San Francisco to visit friends is a big-ticket item. For others, going out for dinner with friends is certainly not a small-ticket item.

The dramatic growth of emphasis on self  in our society is disheartening. The media encourages us to be jealous of our neighbor’s retirement and embarrassed that we are still working. It encourages us to worry constantly about our image, our weight, our clothes, to focus on ourselves because we deserve it. It demeans the satisfaction and value of doing useful, meaningful work, of having a passion so strong that retirement is not something you would willingly choose.

Until Woman’s Day was sold to Fawcett in 1958, the magazine’s emphasis was on developing skills that would contribute to the happiness and well-being of your family and community. (In the old days, the class that taught cooking and sewing skills was called Home Economics for a reason. In farm communities, women’s contributions were as economically important as men’s.) Today the same magazine has articles with titles like “These Holiday Toys Will Make Your Children Smarter,” and “Woman Seeks Revenge on Cheating Husband by Secretly Selling House.” We even have a magazine called Self. Today you’re in a competition to make your children smarter than your neighbor’s, and seeking revenge is glorified.

When we decide that helping others will make us happier, we join an organization and volunteer a little of our time. Or we pay our taxes, confident that we’re enabling the government to take care of everyone. Or we give our money to charity. Except in structured ways, we don’t get personally involved.

We’re chasing happiness in the wrong place. When I was in grade school, we cooked Sunday dinner for six people, even though there were only five in our family. The sixth person was Mrs. Fuller, who was in her mid-seventies and had arthritis. I would help carry dinner down the hill to Mrs. Fuller’s and deeply enjoy the pleasure she had in her meal. When my classmate Mary’s house burned down, people in the community got involved in building a new house for her family, who had come to town as migrant workers from Tupelo, Mississippi. In our little town, we each felt a responsibility to reach out personally to those in need or in grief.

My birding friend John left a legacy: by his example, he inspired others to be kind and generous. Although his ancestors were German, he had a Native American heart when it came to reverence for animals and plants and the earth. Maybe if he’d planned better, he would have spent his energy and his money trying to find out what might be wrong with him. (He had no symptoms and no warning.) Instead, John spent his energy and money helping others.

I wonder what those people are doing who are “enjoying their retirement” while you slave away. Perhaps they have become obsessed with an expensive active lifestyle, planning to stave off death. But what are they really doing?

The happiest people I know are the ones making a difference to others. My friend Bill teaches continuing education classes, in spite of health problems resulting from exposure to Agent Orange.  Another friend who is a “retired” teacher, volunteers in a literacy program several mornings a week at the local elementary school. My friend Dr. Berkeley continued seeing patients until she was in her nineties. Would she be jealous of those who were living a well-planned retirement? I think not.

I laughed aloud when I came across a title in the Summer 2010 issue of Wealth: “A Well-Planned Exit Strategy.”

My message to everyone this holiday season is two thousand years old: “It is more blessed to give than to receive.” Empower someone this season. Really focus your attention on someone: a child, a friend, a stranger. Just for a few minutes actually listen, instead of waiting for them to stop talking so you can talk. If you know someone who is housebound, stop by and keep them company for a little bit. No need to take a gift; just be present with them. Share both the sorrows and the joys of others. Write a letter to someone this season, to just one person. Not just a card. Think about how wonderful they will feel to get a real, hand-written letter. The best things in life really are free.