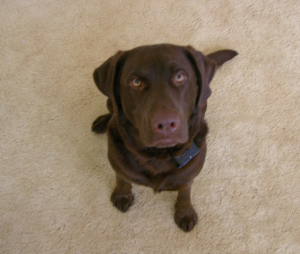 I awoke from a frightening dream and found myself listening for the comforting rhythm of your soft breathing, for reassurance that everything would be all right. Silence filled the blackness of the night. You were there under my bed, but your presence was now contained in a box of ashes.

The memory of you makes my heart ache, yet I hug that heartache close, afraid to lose the memory, afraid that in losing that sweet ache, I’ll lose you. You’ll never have existed. So I’m writing you at your new address on the far side of the Rainbow Bridge, hoping that my writing will prevent you from vanishing entirely.

I found a derelict green tennis ball in the dog run the other day. It was the ball I threw for you after the Kong you loved so much got too heavy for you to keep clenched in your jaws.

For more than thirteen years my daily routine was dictated by your needs. Oddly, you reminded me of my mother. Like her, you were terrified of thunderstorms, and you needed structure and order to keep your anxiety at bay. Dinner was precisely at five o’clock every day, no matter what else might be happening. For months after you left us, I started out of my chair, heading for your food dish at five. I wasn’t ready to break our connection. 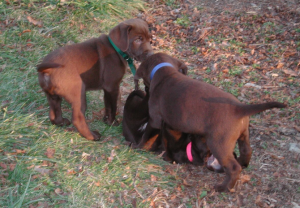 Assisting in a Caesarean birth that Indian Summer afternoon was far from our minds. We expected to be raking maple leaves and picking apples while waiting for your mother to whelp. Guinevere had grown even more rotund than usual during her pregnancy. We expected a big litter, born at home as in the past, with puppies arriving one at a time. The pups would be squeezed through the birth canal, your mother would clean up each one, chew off the umbilical cord, and push each new arrival around the whelping box to get its lungs working.

Instead, all the puppies arrived at once.

The first puppy was breech, and your mother was in trouble. Without a Caesarean, you, your eight siblings, and your mother might have died. We made it to the vet on time, but the technician did not. Nine puppies had to suctioned and whacked to life simultaneously, with your human family, now instant veterinary technicians, working feverishly. It was no time to be squeamish.

You all made it. One of your human brothers slept in the summer kitchen with you for the first two weeks to make sure that each of you got equal feeding time. Your mother had evidently been traumatized in the litter, probably being pushed away from the teat by bigger littermates, and she ended up with a lifelong obsession with food. We didn’t want that to happen to any of you.

All your littermates passed the temperament tests with flying colors, but you and one of your sisters stole our hearts. Your sister Gypsy went to live with her human sister, and you became part of our core family. 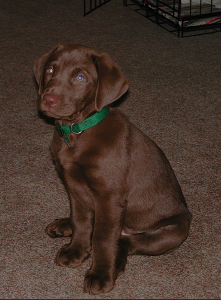 Three months later we moved cross country to the high desert. When the summer monsoons brought heavy rain, hail, thunder, and lightning, we discovered that you were terrified of storms. Nothing would comfort you. The ThunderShirt was advertised as having “a dramatic calming effect for over 80% of dogs.” You weren’t one of the 80%. It broke my heart to see you tremble so.

We tried lying on the floor and holding you. We tried creating a dark retreat in my closet. We tried letting you sleep with us, but you only paced back and forth across our bodies, pounding us with all of your seventy-five pounds. I had always loved storms. Now I dreaded them. I looked forward to a good night’s sleep some day when you were no longer with me. Now I look back and realize what an honor it was that you had such profound trust in me.   You thought I could actually control thunderstorms! You always turned to me first. I would be awakened by your nose pressing my pillow, your eyes wide with fear because you’d heard a thunderclap a hundred miles away. I am so sorry that I got irritated when you kept me up all night, best buddy.

You peed. In the house. If someone raised their voice slightly; if we were out and someone came to the door; if the day’s routine were disrupted. And where did you pee? Most of the time, you peed on my towel. Now I realize that you were just marking something that belonged to me to warn me that something was amiss. I’m sorry I griped so much about cleaning up your messes.

I miss you in a way I never missed any of your predecessors, however much I loved them. I miss the softness of your velvety ears, the way you closed your eyes in pleasure when your human dad scratched them in a certain way.

I miss the way you redistributed my shoes for me. I still wonder how you managed to retrieve shoes from the top of the organizer. I never caught you in flagrante delicto, and you never touched anyone else’s shoes. You delighted in hiding a shoe from me. I guess you thought the intellectual challenge of finding my footwear would keep me from becoming senile.

I’m sorry I pulled so hard on the leash when, regardless of consequences, you were headed for the oleanders along the road, the ones attractive because they smelled like desert cottontails. They also harbored the neighborhood rattlesnakes. I was only trying to keep you safe.

I miss your feats of aerial acrobatics, your double axels when catching the Kong. I miss your running dreams.

People with small dogs feared for their pets because you were so big. It made me laugh because most small dogs terrified you. Big dogs were okay, but you cowered behind me when confronted with the little guys. Except for that one Yorkie, Willow.

I miss your friendliness towards people, the way you would nearly pull me off my feet to say hello to a stranger. When I had been egregiously wounded by life, I still had to walk you. When life as a hermit seemed ideal, you introduced me to people. You got me out of my shell in spite of myself. I always introduced you as Merlin the Magician, explaining that you could make food disappear. A stale joke, but one that helped me break the ice.

You loved me with all my flaws, always as excited to see me as if I were the Queen of the Universe. You comforted me through the hardest and saddest time of my life. You were so sensitive to my moods that I had to pretend to be calm when transporting a family member to the emergency room or when dealing with anonymous phone calls or when precious family pictures were destroyed by careless movers. I loved you so much that I didn’t want you to be frightened. Because of you, my pretense at courage became actual courage. No matter how traumatic my day, I worried about how you were doing. You were never absent from my thoughts.

I would clean up another thousand pools of vomit and rivers of pee if I could only have you back. I hope when I die, you’ll be there on the other side waiting for me. Maybe by then, we’ll speak the same language, and you can tell me what you were chasing in your sleep. 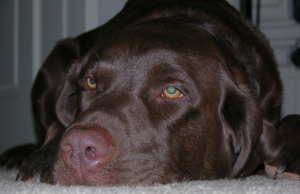